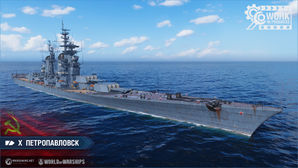 Another heavy cruiser variant of Project 82 that was reworked, taking into account the experience gained during World War II. In addition to her 220 mm main battery guns, the ship received powerful dual-purpose artillery.

Petropavlovsk doesn't have any upgrades to research.

The recommended upgrades for Petropavlovsk are as follows:

Petropavlovsk can equip the following consumables:

Ships of U.S.S.R.
Cruisers
Retrieved from "http://wiki.wargaming.net/en/index.php?title=Ship:Petropavlovsk&oldid=296235"
Categories:
Your location:
To log in, select the region where your account is registered
CIS Europe North America Asia Republic of Korea
Or use Microsoft Login to enter WoT XBOX ecosystem
Log in