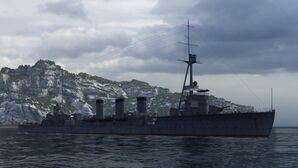 Tenryu was a high-speed light cruiser designed as a destroyer flotilla leader. She relied on a scarce yet rapid-firing artillery. The ship also carried a sufficiently powerful torpedo armament. Tenryu was the first in the Imperial Japanese Navy to be equipped with triple torpedo tubes.

The Tenryu was designed to lead destroyer flotillas and is capable of doing just that. The fast speed and great maneuverability makes the Tenryu very competitive in a destroyer fight. It is the first Japanese cruiser to be equipped with torpedoes and are arranged in 2x3 configuration. This allows it to engage enemy ships with an easier chance of hitting different areas while sacrificing the ability to face many enemies at once. The Tenryu also has 4 fast firing 140mm guns able to pummel destroyers and cruisers while becoming a nuisance to battleships setting them on fire and using up their damage control. The bad side of this ship is its terrible armor and large size. The citadel and propulsion are easily damaged with guns 152mm and above. Avoid getting into large firefights as you cannot stand up to the punishment. Stay with your destroyer friends and act as a second wave mopping up leftover targets to help your team to victory.

Availability of researchable upgrades for Tenryū is as follows:

The recommended upgrades for Tenryū are as follows:

Tenryū can equip the following consumables:

Tenryu captains should mount the standard flags to improve the ship's performance in battle. To improve upon the ship's armaments, India X-Ray (

Tenryū (天龍?) was the lead ship in the two-ship Tenryū class of light cruisers of the Imperial Japanese Navy. Tenryū was named after the Tenryū River in Nagano and Shizuoka prefectures.

Ships of Japan
Cruisers
Retrieved from "http://wiki.wargaming.net/en/index.php?title=Ship:Tenryu&oldid=311179"
Categories:
Your location:
To log in, select the region where your account is registered
CIS Europe North America Asia Republic of Korea
Or use Microsoft Login to enter WoT XBOX ecosystem
Log in